As of 06/24/21, Ogden City has prohibited fireworks and open flames within city boundaries.

Ogden City Council and Mayor Caldwell entered a joint resolution this evening that has increased fire restrictions within Ogden City limits.  Effective immediately, due to the existing extreme hazardous conditions throughout the city, the prohibition on any person igniting or discharging class C common state approved explosives (fireworks as defined in Utah Code 53-7-22(5)) and a prohibition on open burnings and recreational fires (as those terms are defined by the International Fire Code) within the boundaries of Ogden City. This prohibition is effective through November 15th or such time as environmental conditions improve.

The following was posted June 2nd.

FIREWORK AND OPEN FLAME RESTRICTIONS
Background: An abnormally dry winter and spring has created an earlier than normal fire danger. Data from the National Weather Service shows that the northern Utah region is in “extreme” drought with little to no chance of improvement during fire season.
Based upon this data, the following restrictions are being established.

By Order of the Fire Marshal: The following restrictions shall apply to the use of fireworks and open flames. The restrictions will be in effect from June 2nd 2021 through September 20th 2021, or until conditions improve.

Restrictions Defined:
The use of any firework device or open flame shall be prohibited in the following defined restricted areas.
Geographical Areas Defined:
1. All areas east of Harrison Boulevard from the north city boundary to the south city boundary.
2. All wooded areas along the Ogden and Weber River Parkway beginning at Harrison Blvd and continuing along the pathways to the west city boundary and the south city boundary. This also includes all associated parks along the River corridor.
3. All of Fort Buenaventura, the city baseball park and dog park area located off of A Ave.
4. The old landfill property located at approx. 2550 A Ave., near Fort Buenaventura.
5. All open fields, vacant lots, wooded areas, and brush covered hillsides throughout the city.

Unlawful Acts Defined:
See Ogden City Ordinance 11-6-3, section D:
11-6-3. [HAZARDOUS ENVIRONMENTAL CONDITIONS:]
A. [Definitions:] For purposes of this section:
IGNITION SOURCE means any lighted or burning material or object, including recreational fires or campfires, a lighted pipe, cigar, cigarette, firework, lighter, match, or smoking paraphernalia.
MOUNTAINOUS, BRUSH-COVERED, OR FOREST COVERED AREAS means areas or zones with open fields, vacant lots, wooded areas, and brush covered hillsides throughout the city; and includes all wooded areas along the Ogden and Weber river parkway beginning at the eastern boundary of the city at the mouth of Ogden Canyon and continuing along the pathways to the west city boundary and the south city boundary and any associated parks along the river corridor; all of Fort Buenaventura, the city baseball park and dog park area located off of A Avenue; and the old landfill property located at approx. 2550 A Avenue, near Fort Buenaventura.
WILDLAND URBAN INTERFACE AREA means the line, area, or zone where structures or other human development meet or intermingle with undeveloped wildland; and includes all areas of the city east of Harrison Boulevard from the north city boundary to the south city boundary.
B. [Prohibition on Use of Ignition Source:] It is unlawful to ignite or use an ignition source in the following areas during those periods of time that the fire marshal has determined hazardous environmental conditions exist or are expected to persist when notice has been filed with the city recorder:
1. Mountainous, brush-covered, or forest-covered areas;
2. The wildland urban interface area; or
3. Land being used for an agricultural purpose.

Penalties Defined:
A violation of a notice issued under this section is a class B misdemeanor, subject to the penalties provided under title 1, chapter 4, article A of this code.
Individuals responsible for fires that result from negligence including the parents of minors may be held accountable for the cost of damages and expenses related to firefighting efforts. See City Ordinance 12-12-3.
Reporting:
Please report all fires and fireworks that you witness in the restricted areas by calling Weber Area Consolidated Dispatch Center at 801-629-8221.
PLEASE HELP KEEP OUR COMMUNITY SAFE FROM FIRES. WE URGE EVERYONE TO USE COMMON SENSE THIS HOLIDAY SEASON AND PRACTICE EXTREME CAUTION.
Issued By:
Kevin Brown
Fire Marshal
Ogden City Fire Department 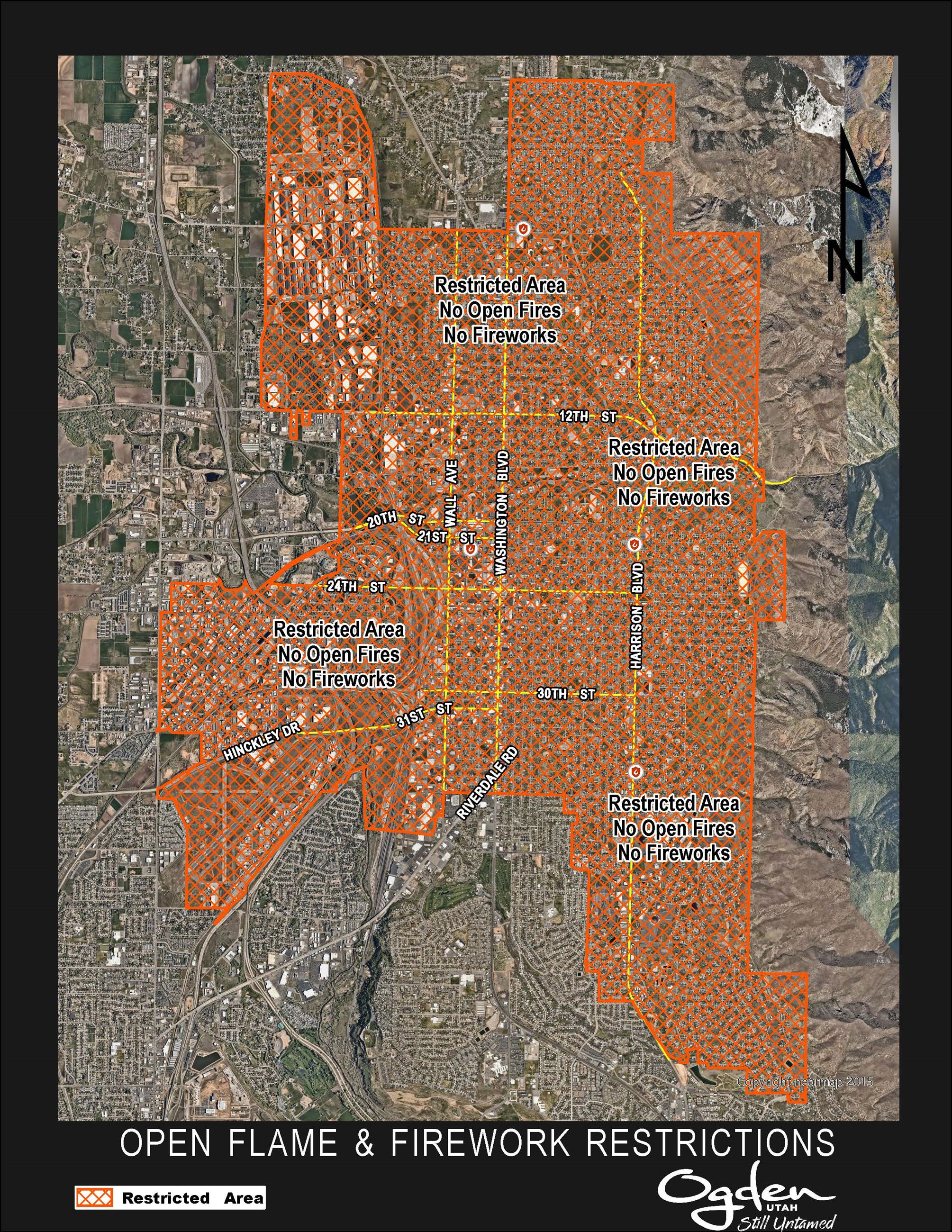