Richard Hyer was born in Ogden in the park on Harrison Boulevard between 24th and Capital Streets.  However, it was then the Dee Hospital.  He has lived in Ogden all but three years of his life and attended Ogden City schools, graduating from Ben Lomond High School. He also attended technical schools in Minnesota and California.  Richard and his wife Bonnie have raised six children, all who still live in the area.

Richard has worked as a jeweler/goldsmith since he was 13 years old and does jewelry repair and custom design work for local and out-of-state retail jewelry stores.  Prior to his election to Municipal District 2 in 2011, Richard served on the Planning Commission for Ogden City since 1995, and has participated on almost all community, district, and corridor plans for the city, including membership on the Involve Ogden General Plan Development committee.

As part of his volunteer service, Richard serves as the vice president over relationships for the Trapper Trails BSA Council as well as Wood Badge coordinator for the Council. In addition to being committed to working hard for the residents of Ogden’s Municipal District 2, Richard is equally dedicated to being a voice for all Ogden residents.  He will remind Council members that there is more of Ogden north of 12th Street.

Richard remembers the ’60s and ’70s when downtown Ogden was inviting and vibrant before its decline.  He is dedicated to its recent resurgence and would like to see the business district continue its growth while maintaining safe, friendly, and diverse neighborhood communities. 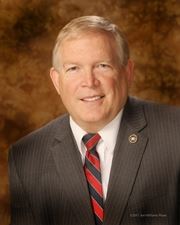