Bart Blair was born and raised in Ogden. A graduate of Ogden High School and Weber State University, he was elected to the Ogden City Council in November 2009 as one of three members representing the City At Large. Bart chose to run for City Council because he is both a father and a local business owner. He understands the direction of the city and the decisions about its growth directly affect all Ogden families and local businesses. Bart is very interested and concerned with Ogden's growth and development.

Bart spends his days at his family-owned business, Blair's Sinclair and Service. The gas station and convenience store have been serving the Ogden area for over 50 years. He loves his job and the opportunity it provides to meet and interact with the citizens of Ogden on a daily basis.

Bart has three daughters. He enjoys golfing, hiking, jogging, and camping with his family. He is both thankful and proud to have grown up in Ogden and for the ties he has to the community. 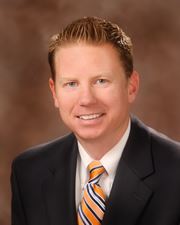